What is Tuesday Nightowls?
NightWriters. Nightowls. We’ve gone through a few name changes, but still ultimately the same thing. So what is Tuesday Nightowls you ask? It is essentially a regular social gathering of Guild members as well as any other budding writers whom wish to engage with other writers in a friendly, casual atmosphere.

What do you do in these Tuesday Nightowl gatherings?
You can write, you can talk or just sit and people watch over a cup of coffee. Having space to write is important for any writer and it is ensured that there is space available regularly for those that need it, and don’t mind the active café atmosphere. Conversations, while they will draw you away from writing time, can be quite helpful in the creative process. Brainstorming over ideas, problem solving over a writers block, or lamenting the woes of publishing, a helpful ear is but a booth away. With a growing number of Nightowls, there is a wide range in resource to help. We do have one rule though; if they’re in the writing zone, don’t bug them too much. Good thing we set aside two booths so one can happily write, while the other can happily converse. 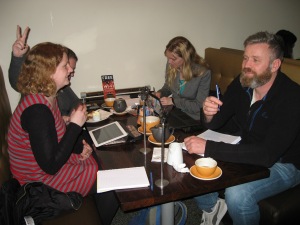 Who organises it?
The Christchurch Writers’ Guild, though specifically Chris Yee is the one that manages the Nightowls. You can enquire for contact details, however the best way to get in touch with him is through the Guild Facebook group.

Where and when do they happen?
The Tuesday Nightowls meet from 7pm until late at Bush Inn Coffee Culture, so writers can come in and leave at any time they please. There may be times when we shift venue, and this is usually communicated at least a week beforehand. To find the booths we’ve booked, look for the sign with the Guild logo on it. Or the group with many a laptop open. 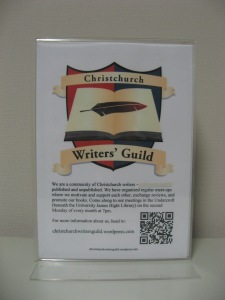 How did this idea come about and how long has it been going on?
This came about as an idea between myself (Chris Yee) and a fellow guild member, Shelley Chappell after finding that the Monthly Guild meetings left quite a gap in between socialising and up to date news on the literary world. Evenings were the best choice for those that work during the days, so deciding which day would work best for everyone proved to be a bit of a puzzle. Through a stroke of serendipity, a mysterious writer appeared in the Canterbury Writers Meet-Up advertising for a regular meeting to occur on Tuesday evenings. After a bit of digging around to the location of Addington Coffee Co-Op, it seemed that this was outside of the trading hours (this was before I knew you could book it in for evening use), and so the first Write-In occurred on February 18th, 2014, in Riccarton Starbucks with a total of four showing up. With testing of various venues over the following couple of months until we settled on our regular nest, it has been continuing on strong since. One night we had 12 people trying to vie for seating! These days we average between six to eight, but there are always new people showing up. 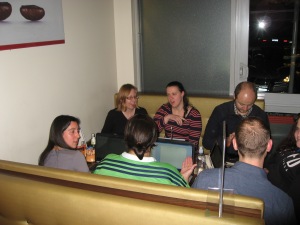 Due to its popularity, East Side Writers had been formed to accommodate for those that could not make it to Riccarton in the evenings, as well as allow those with time in the mornings to have that much needed social engagement and writing space.

Chris Yee is, among other things, a game designer, writer and lego expert. He is also, the Guild Treasurer and great at organising things.

This entry was posted in Events and tagged Chris Yee, event, Guild members.