Angela Oliver maintains and updates the blog, which includes asking the other committee members their interview questions, and she thought she might be interviewing herself. Luckily, Judy Mohr (our new President) has put forth the following questions: 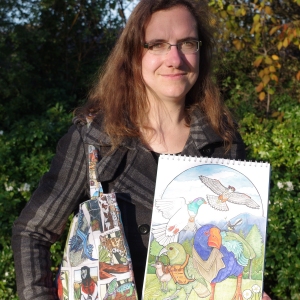 Every time I see you, you’re drawing another creature of nature. This is obviously a part of your creative process. Tell me, where did this love of animals begin and how has it influenced your writing?

I can’t really say precisely where my love of animals began, because I’ve been fond of them as far back as I can remember. I imagine my parents (who gave us bunnies and a kitten) and my nana (who would take me to feed the ducks), had a strong influence. Birds were a particular passion, and I persuaded my parents to let us keep parakeets, including the construction of three aviaries. To date, most of my stories have contained at least one animal. Some are written from the animal’s point of view, in others they are a major component of the plot. I have strong conservation views, and wish to educate the audience (I tend to write for the 10-14 age range), increasing awareness, without (I hope) coming across as too preachy.

I have a main core cast of characters that I have illustrated for years. Many of them I have created detailed background stories for, but for the most part these stories remain in my head (slowly slipping away). Of my recent illustrations, I have mostly been concetrating on wild animal illustrations. It is hard to say who my favourites and least favourites are – but I find humans a LOT harder to draw, and thus mostly encourage other people to draw them for me.
One of my favourite character creations is Rhapsody Kelpdance: 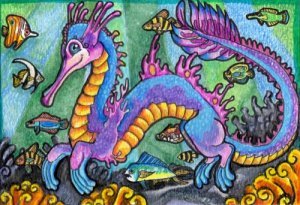 I’ve never written Rhapsody’s story – or even developed it particularly far – but I do love the gentle flowing lines of her, and creating a dragon based on the leafy sea dragon was fun.
My least favourite to draw are the frightening ones. Not because I dislike frightening stuff, but because I cannot do it well. Everything I draw comes out looking somewhat whimsical and cute.

You were one of the original founders of The Christchurch Writers’ Guild. Tell me, how did that come to be?

It all began in Paper Plus, Hornby, when I came upon Beaulah’s book, picked it up and thought “oh look, another local author who has published through CreateSpace”. I took note of her name and looked her up when I got home, acquired the ebook (apologies to Paper Plus and Beaulah) and emailed her. She replied, we met for coffee and got discussing writing in Christchurch. At that point, there didn’t seem to be a particularly involved social network for writing, I’ve later learned that I just wasn’t looking hard enough, but we decided that we would begin one, starting with the community on facebook. Writing is a lonely business, and can be quite discouraging when you struggle to finish, become overwhelmed by the editing process, then finally you finish it and don’t know what to do with it after that…  Well, our idea was to bring writers together to read and review each others’ work, to encourage and enable those that wanted to write, and connect like-minded people. I really love the sense of community we’ve got going within the Guild – the fact that many of us meet outside of the regular gatherings, and that I have formed genuine, long-lasting friendships. When you cannot talk to your spouse, siblings, parents, or friends, about writing, then you can turn to the Guild.

The Guild has morphed into something much greater than those original days. How do you feel about that and where would you like to see the Guild head in the future?

It’s a bit scary being an official incorporated entity! But, honestly, I don’t want to see it change too much. I would like to see more anthologies – especially encouraging participation from those members that may be a bit reserved about sharing their works – and perhaps a “shared world” series. We did some workshops early on, and I hope that we can re-commence them again soon, given members pratical exercises and inspiration to continue with their craft.

Many new writers among the Guild seek you out to read and/or edit their material. What advice do you often give to new writers? What advice would you give to those of us not so new?

For new authors, my main piece of advice is to write, just write! Even if it’s rubbish, just do it. “Don’t get it right, get it written,” as Barbara Arnold, my writing for children tutor, says.

And for those of you with completed manuscripts:
I enjoy reading “new” manuscripts, the freshness of something that has not been edited into sterility. However, there are a few things that I would change if given the opportunity. It’s very easy to spell-check a novel, however, spell-checker does not find homophones. And auto-complete can substitute the intended word with something that not only makes no sense, but is frankly hilarious. I have yet to read a novel written on a cell phone using autocorrect, but imagine that would be a nightmare. My advice to writers is: before anyone else reads your novel, read it yourself first – from cover to cover – and keep an eye out for misused words. Every time I come across one of those words, it is like I have been slapped out of the plot. It ruins my concentration and switches me from reader mode into editor mode.
Otherwise, try and get the grammar as correct as possible. It doesn’t need to be perfect – a beta reader will always expect a few typos – but you want your readers to pick up on plot holes and discrepancies, not become distracted by mentally stabbing in commas and full stops, tracking down errant apostrophes or taming wayward semi-colons.

Back to your writing: what do you see of the next step for you? Will we ever get to know what happened to your lemurs?

I’ve been thinking about writing again a lot. Many of you may be aware that I’ve been in a writing rut for most of 2015, having barely written anything fiction. Part of this is my animal-a-day project, which includes drawing specific creatures for NZ Art Cards (coming soon to an independent bookstore or DOC i-site near you, I hope!) and general slump. The second novel in the series, “A Tail of Two Scions” is a dual-char book, following Rakoto and Aurelia. Rakoto’s side of the story is pretty much done, but Aurelia’s is proving to be a struggle, mainly defining the conflict and keeping it structured. And then I have to interweave the two. I did re-read the third draft of Aurelia’s beginning and feel it’s pretty good, really, and I should just soldier on with the darned thing. So, the answer is YES. And my animal-a-day project will be finishing early next year, so I can concetrate fully on writing once more.

And just for the fun of it: if you could be an animal (other than human), what would you be?

I know you expect me to say a lemur, but I think, instead, I would like to be a parrot. Long-lived, intelligent, with a handy appendage for manipulating objects (their beak) and, of course, they can fly. But what sort of parrot? That’s an almost-impossible question, but I would rather fancy being able to turn into a kea. 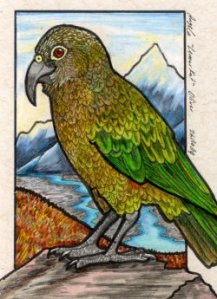 Angela has written and published three books via Amazon’s CreateSpace program and is currently involved in drawing an animal-a-day on her blog: ZooTrophy. She has also created a collectible trading card game about ecosystems and food chains.

This entry was posted in Our Authors and tagged Angela Oliver, committee, interview.