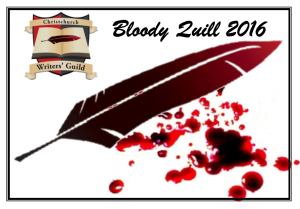 Recently, the Christchurch Writers’ Guild held their first ever annual awards dinner. As part of the awards, our members were invited to share snippets of their writing. This is just one of the extracts that graced the imaginations of our membership.

This snippet was submitted by
J L O’Rourke for consideration for the Bloody Quill, stories about death scenes.

“Been heading that way for a while, I reckon.”

“She should’ve lasted a few more years though.” Bill reached out his hand, shaking fingers stretching but not quite touching the cold body. “I thought she would have seen me out anyway.”

“I dunno, mate.” Andy shook his head but avoided making eye contact with his best friend. “Let’s face it, she’s been sounding dodgy for a while now. I reckon the writing’s been on the wall. Nothing lasts forever.”

“Nope it doesn’t, but it would have been nice if she’d made it through the summer. I wanted to take her on holiday one last time, a sedate little drive up around Nelson to the bays then maybe over to Punakaiki.”

“That would’ve been quite a trip for the old girl.”

“Yep, it’s a favourite. Done it a few times over the years. We went the other way, too. Down south, over the Pigroot to Arrowtown and Wanaka, and even all the way down to Invercargill once. Detoured up to Te Anau to see the glow-worms. They’re a sight for sore eyes, I can tell ya.”

“Yeah, I remember them. Back in the ‘60s, when I was workin’ on the Manapouri scheme, we used to go up to the Te Anau pub when we got a few days off. I did that glow-worm tour a few times. Bloody spectacular.”

“Yeah, seeing it again would have been nice.”

Andy looked up at his taller friend, pushing his battered fedora hat back on his head so he could scratch his receding hairline in a habitual gesture of disbelief before replacing his hat in its customary position on his brow.

“You can still go. For gawd’s sake, mate, it’s Ethel who’s dead, not you. Just cos you can’t take her, doesn’t mean you have to stick at home forever.”

Bill reached out again. This time his stretched fingers made halting contact with the body in front of him. He started to trace a quivering line along her side but pulled back as if the touch was physically painful.

“Yeah, I guess,” he agreed. “But, somehow, it just wouldn’t be the same. Sure, it might be quicker, I wouldn’t have to stop every couple of hours to give the old girl a rest, but I dunno, if I can’t travel with old Ethel, I don’t think I want to bother any more. Forty-eight years it’s been, forty-eight years.”

Andy nodded, keeping his friend talking, knowing instinctively that talking would ease the sense of loss. Andy knew a bit about grief. He was on his own now too. He might not have understood Bill’s unshakeable attachment to Ethel, but he recognised the emptiness her loss would leave.

“That’s a fair while. She must have been a beauty in her day.”

“She sure was. I was only twenty. I was working for my dad, out on the farm. It was Show Day. We had our prize heifers entered in the show and I was on duty, looking after them while Dad went off to talk business in the pub tent with his mates. She went past the shed and I was smitten. I didn’t know how I was going to get her, but I knew I had to. When Dad came back I told him all about her. He laughed until I pointed her out, sitting all pretty over by the grandstand. Then he understood. Gave me some good advice, shoved some money into my pocket and told me to go and get her. So I did. Forty-eight years ago. She’s still a beauty.”

“So what happened? Was she like this when you found her?”

“Yeah. I was getting ready to go down to the T.A.B., to put a bet on the trots. I forgot my betting slip, so I left her here while I dashed back inside to get it. Came back out and she was coughing and gurgling and this,” he swirled the tip of his worn-out sneaker in a spreading pool of reddish brown, viscous liquid that darkened the pristine concrete floor of the single garage, “this was pouring out of her.” Bill spread his hands in a shrug of futility. “I couldn’t stop it.”

“Yeah, I reckon it would take a bloody miracle, and even the Magic Man can’t work those. No, time to face the truth. Old Ethel’s gone.”

“No,” Bill ran his hand fondly over the curve of Ethel’s back. “No, I think I’ll just cover her up and leave her here. Till I’ve figured out what to do. Can’t get my head around it at the moment.”

“All right. I’ll leave you to it then. She was a good old girl. There’ll be a few around town who will miss seeing her out and about.”

“Yep. She was one in a million. Before you go, can you give me a hand to push her a bit further into the garage so I can get the door shut. Then I had better try and get this mess off the floor.”

Bill patted Ethel again then placed his hands firmly on her back and began to push. With Andy’s help they eased her forwards. Andy straightened up, adjusted his hat, scratched his head and nodded.

“She was a fine lady. You won’t find another one like her. They sure don’t make cars like the ’68 Pontiac Firebird any more.”

J. L. O’Rourke is the pen-name of Jenner Lichtwark. Jenner writes contemporary murder mysteries, urban fantasy, stories for children and rambling freeform poems. The Christchurch earthquakes have left a legacy of anxiety and panic attacks which saw her quit her regular job in 2012 to establish Millwheel Press Ltd, publishing her own works and offering editing advice and assistance to other writers. When not writing, Jenner enjoys being in a theatre, either onstage as a singer or backstage where she has been everything from floor crew to stage-manager. She lives in Christchurch with an assortment of hairless dogs, fluffy cats and grumpy guinea pigs.

This entry was posted in Our Authors.