Chris Yee is our Treasurer. He has studied animation and worked as a game developer. Currently he tutors at the Yoobee School of Design, and for the Imagination Station (Lego!). He also, of course, writes! 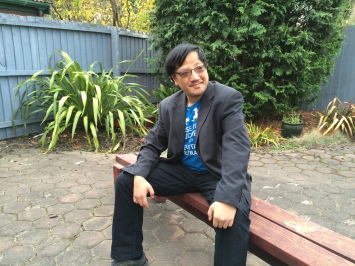 Chris, can you please tell us a little more about yourself (and your creative endeavours)?
As mentioned, I teach Film, Video and Animation at ACG Yoobee School of Design, though to say my creative endeavours are restricted to motion graphics is a bit of a misnomer. Storytelling for me has always been an ongoing endeavour. I would probably go so far to say that it is something humans have had since the dawn of time, but I digress. While perhaps being something I’ve been doing for a long time, it was by no means a successful one as yet. I am quite bad at coming to conclusions, finishing off the story in a satisfactory way. I’ve read various literature in my youth, ranging from Sci-Fi notables such as Carl Sagan and Michael Crichton, to really cheesy titled books such as ‘Only You Can Save Mankind’, which ironically may have been my first introduction to Terry Pratchett. When the only storytelling ended up being in the form of mostly schoolwork, which at the time to me felt greatly restrictive, it took a back seat from the remainder of my studies. Then, sometime in 1999, I was approached by someone on ICQ (yes, this was THE chat messenger in those days), offering what was best described as text based role playing in the vein of a Star Trek theme. Intrigued at this I signed up, going through the processes and protocols of IRC (Internet Relay Chat, effectively real time forum chat rooms) and just fell in love with it. It was essentially being an actor, a screenplay-writer and a director all at the same time. Improvisation was key in being able to work with the stories created by the person in charge of running the Sim (short for Simulation). For a number of years I forged lifelong friendships and somewhat improved my ability to tell stories in a dynamic atmosphere. This real time, present tense scriptwriting eventually moved on to a past tense prose as it moved to a non real time format which has pushed my motivation to write in this way. A few years on I had become intrigued at the growing market of digital film-making, applying and studying at Natcoll Design Technology (now Yoobee School of Design) in 2006. Studies into the practical application of storytelling in a audiovisual medium helped me gain an understanding of how these aspects enhance written media in general, pushing me further to create fun and engaging stories. My road to writing has been a rocky and tumultuous one, but I still keep going with the help of friends and family who support my endeavour, and while I still regard this as a casual activity, I know it will lead to something greater.

Game development was an amazing experience. While I was brought on solely as an Artist, I moved up to the role of Technical Artist, in that I had to deal with technical and programming issues to ensure that the art side of things were consistent in the vision of the game producer. If not, then I’d find ways to get it working. Problem solving and analytical processes were something I was known for, and typically aren’t traits a creative artist possesses initially. It was sad to move on from this, but it has lead to other opportunities and can be something I can always return to.

Recently, at least this year of 2015 I had been approached to teach Stop Motion movies using Lego for the Imagination Station based in Christchurch. This was quite an engaging endeavour as it put two of my favourite things together (Film and Lego) to help kids of all ages explore storytelling aspects in a visual format as well as teaching them to understand some technical aspects of film-making. While teaching at Yoobee has now taken up the time I typically had for teaching at the Imagination Station, this has expanded significantly in teaching material with others taking up the mantle and I fully expect it to continue amazingly in the future.

How does telling a story via visual media (such as animation) differ from telling a story via written media?
In what ways are they similar?
The way that visual media communicates ideas and concepts lies in its delivery. While written media communicates various ideas over time, movies for instance provide additional depth to it in the form of an audiovisual sensory experience. In a lot of ways this can condense a lot of the material given; a lengthy descriptive exploration in a book can be represented by a brief scene of imagery in a movie. A conversation between characters is now enhanced by their body language, their tone of voice, and the cinematography. In short, this application of storytelling opens up a whole new realm of artistic expression. Structurally, they are no different; they more often than not have a three act structure, with inciting incidents, rising tension, a climax, falling tension, and denouement. These are the core aspects that make up a good story in any form and will most likely never change.

When writing for the visual, how do you portray a character’s personality?
Personality aspects in a visual medium can, at base level show up in their expressions, their body language and typically how they compose themselves in any given situation, as from a film-makers perspective, actors have to be able to portray any personality the writing and direction call for. Their appearance, clothing etc can be great visual indicators of their base personality, but that’s all surface and in most cases can only communicate where they’ve been. Who they really are, their past, their experience goes so much deeper.

Good thing though, when indicating in a script you can actually say ‘Bob is sad’. It’s up to the actor or animator to interpret this based on the context and scene and express these emotions accordingly via body language and facial expression. Scriptwriters have to be as concise as possible as they cannot fill the script up with endless description. The only section you can go to town on is Dialogue.

What genres do you prefer to work in? Who/what are your inspirations?
Science fiction has always been my staple, but I have been toying with other genres to see if I could do them. Two Science Fiction authors that I’ve been a fan of for a long time are Peter David and Dan Abnett. They write in a way that feels real, as in they’re not all super human types, just normal people thrust into a particular situation and deal with it accordingly, be it war, politics or the pawns of gods. For Fantasy, I still have my sizeable collection of Terry Pratchett. The dry humour is what caught me, and following along with the vein of ‘ordinary people caught in extraordinary situations’, I’ve been more interested in the Nightwatch story arcs, as well as other stories based in the City of Ankh Morpork.

Can you tell us a little about your writing processes/habits?
If you ask any writer, they will typically say they work in complete isolation, absolute quiet and zero distractions. I can work just fine with two of those, and ignore the distractions, unless something really interesting is being discussed. By that point however, the writing time has been sunk but it is often not without knowledge gained. I much prefer writing in the company of others, preferably other writers so as not to leave others in a non communicative state. Noise of all sorts, whether random music, cafe banter, or even a bustling airport terminal, I can easily zone all these sounds out to a indecipherable hum. However, I require these random noises, possibly to occupy my auditory senses so that the rest of my brain can focus, akin to distracting the attention starved child so that some amount of work can be done within an allotted time.

I will say that Scrivener has helped with my organising of my story materials immensely. For those that don’t know, Scrivener is a piece of writing software that aids in providing structure to various projects. I don’t spend too long on this process at the start, but it does help keep story, research and other bits & pieces separate, whilst at the same time having them easily accessible for reference.

And of course, nothing starts the process better than a steaming cup of fresh coffee.

How do you go about creating the worlds that your stories are set in?
Worlds, strangely enough, are one of the first things I start creating as it helps me understand what sort of events and characters will exist. In most cases, at least to date anyway, I create worlds that work for humans as well as any other races and/or alien life forms. With this in mind, a traditional Earth type, terrestrial world works. If this is early on in the story arc, then visualising set pieces to fit the story works for me as a lot of the world isn’t fully formed at this point, so I can be as flexible as I need to be if they help move the story forward. But as I expand the story, I develop town names, cities, nations, politics and so on. These things which I set in place, I make note of in my research files so that my world can remain consistent the more I reveal about it. Whether I describe an entire mountain range for the sake of blowing it up (and seeding plot points for later stories), developing an industrial society, or simply describing the onset of a magical infection that can transform life into something more terrifying, I take great care in cataloguing and integrating these moments and changes as the stories progress.

What advice do you have for anyone who might wish to create their own short animation, game or book trailer?
Have a plan. A good story, while having at minimum an outline, can be as flexible and random as anything. However the technical aspects that go behind the construction process of telling said story has to follow a good, solid plan if there is a deadline to meet. From concept to storyboarding, visual cues and even interactive prompts help guide and give direction to the material, so that all aspects are cohesive. With games, you take on board the story elements and integrate them smoothly with the gameplay elements. While some of the most popular games out there alternate between these two, it is in my mind not the best way to tell stories within a game environment. To use it effectively, the player not only has to be a part of the story, but also help drive the narrative and be invested in the actions they choose to take. This is a long and arduous task for a developer, which leads me back to how you must have an effective plan and solid research into the application of sensory experiences for animations and trailers, and interactivity for games. All this aids in seamless integration into the art of storytelling. Oh and one other thing; have fun while doing it. If you’re not having fun creating it, then you probably won’t enjoy reading, watching or playing it either.